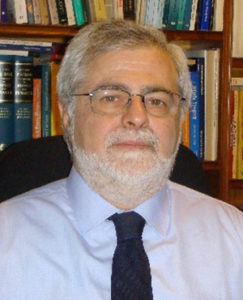 In the past, he has also been an associate professor in the Graduate Studies Programme in the Department of Economics of the A.U.E.B. in the courses of the “Monetary Theory & Policy”, “Banking Economics”, “Macroeconomic Analysis”, and “International Integrations”.

He has studied Economics at the Department of Economics of the Athens School of Economics and Business Sciences (Α.Σ.Ο.Ε.Ε.), he has a Diplôme d’ Études Supérieures Spécialisées (D.E.S.S.) and has received his Doctoral Degree in Economics from the Dijon University, France. He is also a graduate of the Centre International d’Economie Politique – Département B (Institut Universitaire International de Luxembourg – Post Doctoral Cycle).

He has also been a member of the Board of Directors of the “European Investment Bank – EIB (Luxemburg)”.

He has participated in the Executive Committee as well as in the Scientific Committee of the Hellenic Bank Association and in the Board of Directors of “DIAS S.A. – Interbanking Systems”.

He was President of the Organization of Vocational Training (Ο.Ε.Ε.Κ.) of the Ministry of Education and Religious Affairs. He was elected as Vice President at the 2nd International Congress of UNESCO, in 1999 (Seoul/Korea).

He has worked as Special Advisor for the Greek Ministry of National Economy and Ministry of Finance (1982 – 1986). In 1984, was appointed to be General Secretary of the National Council of Development and Planning.